Stephen Banyard opens this edition of the Bridge the Gap newsletter, with our organisation aims and goals for 2022/23. Valerie discusses the rise in pension scams, we share a beneficiary story on this topic and ask for your support in our fight against fraudsters. And finally we introduce Rosemarie Hegarty our new Volunteer and Administration Manager, we look forward to our upcoming events and celebrate our Chairs lent fundraising success. 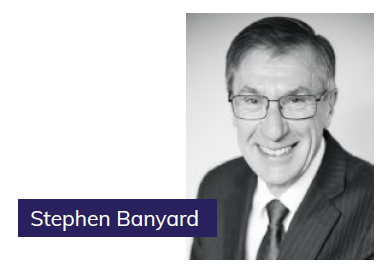 The tax charities have ambitious plans to extend the reach of our services this year through new services and partnerships – building on their terrific response during the pandemic.

Making Tax Digital (MTD) will transform reporting for small businesses and the work of the tax charities and based on research and feedback from our clients and partners, this year we will develop our first support for Making Tax Digital for income tax self-assessment. This is a vital project – We need to raise £100,000 to develop the first pilot and around £360,000 over the next three years for the MTD support.

We partner with specialist charities dealing with vulnerable groups and recent new partners have asked us to extend our range of services to support kinship foster carers, refugee entrepreneurs and recently arrived British Nationals from Hong Kong. We need to raise £50,000 in the first instance to develop these.

Digitally excluded people are often unaware of the usual advice services and so are unaware of the tax help that is available. Our Volunteer Tax Outreach Service will reach out to access the most disenfranchised people – by working with food banks, faith groups and community support networks developed during the pandemic – and bring tax help into the most marginalised communities. We need to raise £10,000 to create a pilot of volunteer networks.

This year is TaxAid’s 30th anniversary and Tax Help’s 21st. We want to celebrate this by developing the outreach of our services. Working within tax you know how your advice can transform outcomes for your clients. Will you donate or raise funds to support our ambitious plans this year and be a part of transforming the lives of our vulnerable clients? 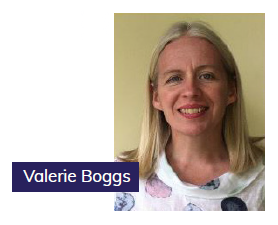 You will be aware of the increased choice brought about by the liberalisation of private pensions, that was introduced seven years ago, but in this time, we have seen an increase in the number of tax bills arising from scams.

People over 55 now have greater access to their pension pots and more discretion on how they are invested and drawn down. At Tax Help we see that the tax implications of pensions are poorly understood. Personal discretion over pension liberalisation has sadly coincided with a massive rise in digital crime. People tend to be more trusting of digital pension communications than face to face approaches. The Financial Conduct Authority has revealed that savers were nine times more likely to accept a pension review online than from a stranger in person. Only 28% realised that a free pension review could be the sign of a scam.

Many of the people we help found that if it sounded too good to be true it really was. In addition to providing false information, fraudsters will typically phone, text or email your clients claiming they have loopholes that can yield a higher level of tax-free cash than the usual 25%. They offer unfeasible returns of over 8% from overseas or new and creative investments. They offer loans, advances, or cashbacks on pensions. Scams ignore the good advice and processes of pension professionals. They suggest a single investment or courier paperwork, requiring immediate signature. Pressure is applied to demand quick decision-making to not ‘lose out’ on golden opportunities. The scammers will only have a mobile number or PO box, rather than a verifiable address.

At Tax Help for Older People, we help devastated pensioners who have lost the rewards of decades of hard work. Their dreams of finally enjoying their savings funding a comfortable old age are shattered. There is redress for any individual who receives poor advice from a financial adviser authorised by the FCA through the Financial Services Compensation Scheme. We help vulnerable people when they face a large tax bill that has arisen as a result of the scam when they have no support and cannot afford an agent to help them understand what has happened and we try to limit the damage. Pension scams are particularly pernicious as long-term investments mean that it is often many years before the tax implications of a scam become apparent. HMRC will contact the victim who is often completely unaware that they owe tax and penalties. They turn to us in confusion and despair.

Tax Help for Older People supports the victims of scams. We also work with other charities, the pensions industry, and the tax professions to spread the word on avoiding scams. Over the coming year we will share some of the stories of pension scam victims so I hope you will continue to read this newsletter. We want you to be involved so please follow us on Twitter on @taxhelp4. If you feel that you or your firm can donate to support our work fighting scams, we’d be delighted to hear from you. View our CAF donation page to make a one-off or regular donation to the charities by visiting this website: cafdonate.cafonline.org/18211 Together we can help the fightback against pension crime. It is too serious to ignore, and we hope we can count on you to support our work.

Rosemarie Hegarty tells us about her new role as Volunteer and Administration Team Manager.

Hello. Ever since my interviews in November 2021 I have been excited about joining Tax Help and TaxAid. Since February I have been welcomed in and I am learning each day more about the charities work, our volunteers and the staff who keep all the cogs turning to ensure the beneficiaries are helped and supported with kindness and expertise.

I have come from a background of volunteer and services management with the Royal Voluntary Service and Blind Veterans UK and prior to that, years of community development with local authorities in East and West Sussex. I am enjoying being able to take the skills I have developed over to Tax Help and TaxAid in reviewing our volunteering programme alongside getting to know our amazing volunteers.

The pandemic has taught us many new skills which enable us to help more people nationally, it is equally important to recognise the benefits gained from working in a pre-pandemic world to deliver a blended approach for the future. Alongside our Volunteer & Administration team I will also be working with our Communications team to raise the profile of the charities and be able to help more people across the UK.

No Cheers for Chairs! 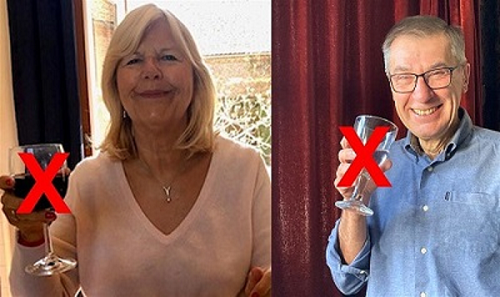 Penny and Stephen spurred on by their success in raising some £6000 when they abstained for 31 days in October 2020, were off the booze again for Lent. You have helped support their efforts to raise money for the two charities that help vulnerable, frightened people who critically need tax advice but can’t afford it.

Raising funds for most charities has been quite challenging in the second year of the pandemic, but they managed to raise over £5,300. There’s still time to support them for their efforts by donating here: https://www.justgiving.com/fundraising/nocheersforchairs-again

The 18th London Legal Walk returns on Tuesday 28th June 2022. A lovely 10K walk through central London’s parks and riversides. In 2021 the Bridge The Gap team, raised an amazing total of just over £10,000 for the two charities TaxAid and Tax Help for Older People. Put it in your diary, bring along your dog and join us for a great time together to raise funds for our charities.

This year, for the first time, we are also walking in the Exeter Legal Walk on Thursday 23rd June and if you live the South West and would like to join our Tax Help staff team, please get in touch with Rose. 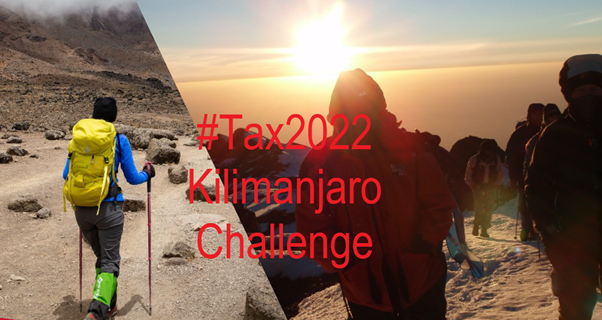 Ain’t no mountain high enough? Oh yes there is! After two years of delays due to Covid, our intrepid group of tax charity trekkers are set to climb Mount Kilimanjaro this autumn. They leave the UK on Thursday 15th September and plan to trek up through the tropical rain forests, across rocky outcrops and up around the snowy crater to the summit. At almost 6,000m this is the highest mountain in Africa and the highest freestanding one in the world.

The trek is virtually full; at the time of going to press there was one place left. If you are interested in joining, either this year or to go on the waiting list for this or a future event, contact Tina Riches at tina@richestax.co.uk

If your firm is interested in being involved by being a key sponsor of the team, then also let Tina know. The team has to limit the weight they carry to the top but could take an advertising banner or wear hats with your logo on it to the photogenic summit. All offers considered!

Our highly successful programme of online CPD technical events for tax practitioners continues this year. Our celebrity speakers give their time and CIOT host and organise the events for us. We are grateful for their support.

Our programme starts on Monday 23rd May when Emma Chamberlain, Rebecca Murray and Heather Self are giving a “Private Client and OMB Technical Update, kindly organised by CIOT. If you would like further details on the programme and how to join https://www.tax.org.uk/btg-may-2022

The programme continues on Tuesday September 13th when Rebecca Benneyworth, Peter Rayney and Carl Bayley are our speakers. The programme details for this will be announced nearer the event.

Andrew called us because he had received a tax bill of £20,000 that he was unable to pay. He had no idea why he had received this but when we looked at the facts we found out that he had been the victim of a pension scam.

Andrew used to be in the army. And, at the time of the scam, he was 50 and had disabilities that had stemmed from his military service. He also has diabetes and Meniere’s disease, both of which are exacerbated by stress.

Andrew was contacted by an old colleague, from his time in the army, about transferring his pension. He was certain he could trust this person as he knew him, and was further assured this person was professionally qualified as he was shown fake documentation as proof. This person convinced Andrew to switch his MOD pension to another pension scheme.

It all seemed very above-board until the pension transfer took place. Andrew received cash of £36,000 but he lost £22,000 in the transfer to the scammer. To add to Andrew’s distress, because he had trusted this person he had also referred his brother to the same advisor before he knew it was a scam.

Andrew was contacted by the police and advised that this was a scam. He co-operated with them to assist in their case, but he did not hear anything further about it.

When he was finally contacted by HMRC with the tax of £15,000 due and penalties of £5,000 he did not understand why, nor did he have the funds to pay. He had no assets and no disposable income.

Through ringing Tax Help for Older People we were able to appeal the surcharge, and are working with HMRC to see if it is possible to secure remission, although bankruptcy could still be an outcome.

View our websites’ for more stories like this: taxaid.org.uk and taxvol.org.uk